Hot Lava Where does it come from… Magma 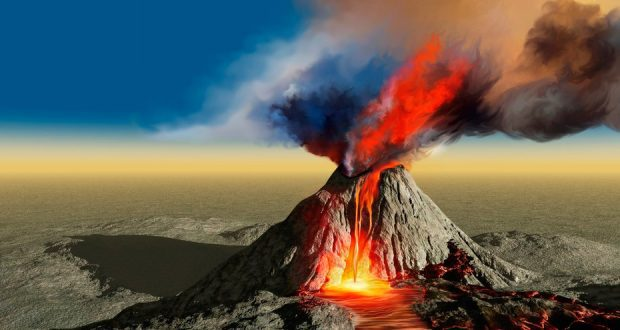 You’ve seen it in movies, documentaries, and photographs. Mario and other video game heroes have died countless terrible deaths falling into pits of the stuff, but how much do you really know about lava?

Where does it come from?

Well, volcanoes. And the lava in volcanoes comes from deep in the earth where everything is molten, right? Wrong! It’s true that as you go deeper into the earth, things heat up, but the earth isn’t a crispy rock shell around a gooey molten center. The crust, mantle and inner core of the earth are all solid rock (or iron in the case of the core). The only large portion of the earth’s interior that is liquid is the outer core, and lava does not come from there (again, if it did, it would be molten iron).

People get confused on this point because in school we learn that the mantle flows and convects heat from the core to the surface. Well, that’s true, but it’s misleading. The mantle flows over timescales of millions of years. If you could dig down and pick up a piece of the mantle and whack it with a hammer, it would break. See, hot rocks are a lot like silly putty. Set a ball of silly putty on a table and don’t touch it and it will slowly deform and flow and flatten. Whack that same silly putty with a hammer or pull it really sharply and it will shatter or snap. So that’s how the mantle can flow, given billions of years, but still act like a hard, brittle rock over shorter time periods. The same happens with lava on the surface.

So if the whole mantle is solid, where does hot, molten, fluid lava come from? Well, in certain places, the crystals in the mantle or lower crust can begin to melt. This can happen if there is a hot upwelling from deeper in the earth, as is the case for the Hawaiian Islands, or if continental crust is being dragged down into the hot mantle. Temperature, pressure and water are the three main culprits in melting rock is called magma.

(Magma is the molten or semi-molten natural material from which all igneous rocks are formed. Magma is found beneath the surface of the Earth, and evidence of magmatism has also been discovered on other terrestrial planets and some natural satellites. Besides molten rock, magma may also contain suspended crystals and gas bubbles.

Magma is produced by melting of the mantle or the crust at various tectonic settings, including subduction zones, continental rift zones, mid-ocean ridges and hotspots. Mantle and crustal melts migrate upwards through the crust where they are thought to be stored in magma chambers or trans-crustal crystal-rich mush zones. During their storage in the crust, magma compositions may be modified by fractional crystallization, contamination with crustal melts, magma mixing, and degassing. Following their ascent through the crust, magmas may feed a volcano to be extruded as lava, or solidify underground to form an intrusion, such as a igneous dike or a sill.

While the study of magma has historically relied on observing magma in the form of lava flows, magma has been encountered in situ three times during geothermal drilling projects—twice in Iceland (see Magma usage for energy production), and once in Hawaii.  – Wikipedia).

Now I’ll explain how temperature, water and pressure together produce magma and what we call lava:

Temperature is the obvious case: heat something up and eventually it will melt. This is the main source of melting for Hawaii, since it is sitting on a mantle “hot spot” but the other two play a role as well.

When things are under higher pressure, it is much harder for them to break free from their nice, orderly crystals and become free-flowing fluids. That’s why the earth’s inner core is solid even though it is at a temperature much higher than the normal melting point of iron. Likewise, it’s why the mantle is solid, even though it is very hot. But as pressure decreases, for example when the seafloor spreads and releases the pressure on the mantle rocks below it, it becomes much easier for the crystals to melt, and some of them do.

As for water, you would think that water would cool things down and solidify the rock. But it turns out that if you dissolve water in hot rock, it lowers the melting point, much the same way that putting salt on ice lowers the melting point. The result in both cases? The solid melts. Water and other “volatiles” are especially likely to end up dissolved in rocks when an oceanic plate gets subducted, dragging with it water-rich sedimentary rocks. This is why volcanoes are common along subduction zones, such as the entire west coast of the Americas.

So that’s where magma and lava come from…